NASA announced on Wednesday that it will send an ice-mining experiment to the moon’s south pole, set to head into orbit late next year.

The mission will head to a ridge close to the Shackleton crater by late 2022, an area where NASA engineers and scientists believe could have ice below the surface.

This region, which has been studied for ‘months,’ gets enough sunlight to power a lander for a 10-day mission, while still being in a clear line of sight for communications.

Scroll down for video

It will be the first time resources are found and extracted on the moon, which could help NASA establish a presence in space, particularly for the upcoming Artemis missions.

NASA is working with Intuitive Machines, the agency’s partner for commercial deliveries to the moon, on the mission. It will use Intuitive’s Nova-C lander. 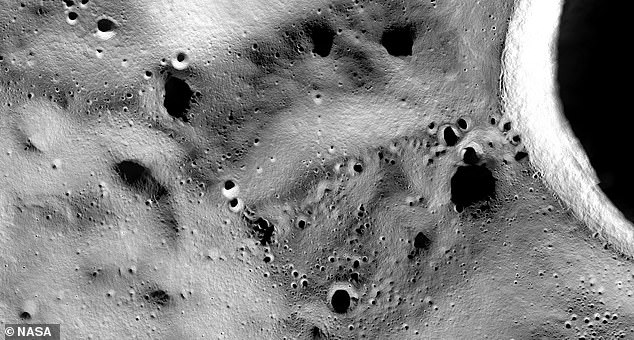 The mission will head to a ridge close to the Shackleton crater (pictured) by late 2022, an area where NASA engineers and scientists believe could have ice below the surface

The agency said this area and the conditions that come with it give the ‘best chance’ for proving that the three technologies on board the upcoming robotic lander will work:

‘PRIME-1 is permanently attached to Intuitive Machines’ Nova-C lander, and finding a landing location where we might discover ice within three feet of the surface was challenging,’ said Dr Jackie Quinn, PRIME-1 project manager at NASA’s Kennedy Space Center, in a statement.

‘While there is plenty of sunlight to power the payloads, the surface gets too warm to sustain ice within reach of the PRIME-1 drill. We needed to find a ‘goldilocks’ site that gets just enough sunlight to meet mission requirements while also being a safe place to land with good Earth communications.’ 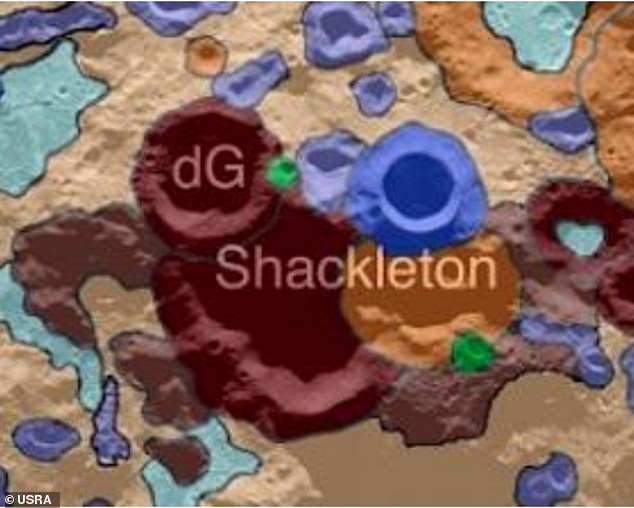 In October 2020, NASA chose Nokia to build the first cellular network on the moon ahead of the 2024 Artemis mission.

Once the lander touches down at the moon’s south pole, the PRIME-1 drill, known as TRIDENT, will try to drill up to three-feet worth of lunar soil (regolith) and look for water once it’s on the surface.

The other PRIME-1 instrument, MSolo, will measure gases that escape from the regolith TRIDENT excavated.

‘Simply operating and drilling into the tough lunar surface will provide valuable insight to engineers for future lunar missions, such as the Volatiles Investigating Polar Exploration Rover, or VIPER, mission, which is slated to land at the lunar South Pole in late 2023,’ NASA added in the statement.

Nokia will test the cellular network by having a rover developed by Lunar Outpost venture more than one mile away from the Nova-C lander to test the strength of the network.

If successful, it could ‘pave the way for a commercial’ 4G/LTE network on the lunar surface, including high-definition video from astronauts to base stations, vehicles to base stations and more, NASA added.

Artemis was the twin sister of Apollo and goddess of the moon in Greek mythology.

NASA has chosen her to personify its path back to the moon, which will see astronauts return to the lunar surface by 2024 –  including the first woman and the next man.

Artemis 1, formerly Exploration Mission-1, is the first in a series of increasingly complex missions that will enable human exploration to the moon and Mars.

Artemis 1 will be an uncrewed flight that will provide a foundation for human deep space exploration, and demonstrate our commitment and capability to extend human existence to the moon and beyond.

During this flight, the spacecraft will launch on the most powerful rocket in the world and fly farther than any spacecraft built for humans has ever flown.

Artemis 1, formerly Exploration Mission-1, is the first in a series of increasingly complex missions that will enable human exploration to the moon and Mars. This graphic explains the various stages of the mission

Orion will stay in space longer than any ship for astronauts has done without docking to a space station and return home faster and hotter than ever before.

With this first exploration mission, NASA is leading the next steps of human exploration into deep space where astronauts will build and begin testing the systems near the moon needed for lunar surface missions and exploration to other destinations farther from Earth, including Mars.

The will take crew on a different trajectory and test Orion’s critical systems with humans aboard.

Together, Orion, SLS and the ground systems at Kennedy will be able to meet the most challenging crew and cargo mission needs in deep space.

Eventually NASA seeks to establish a sustainable human presence on the moon by 2028 as a result of the Artemis mission.