On September 16, at 02:02 CEST (00:02 UTC), the Falcon 9 rocket with its first fully private manned orbital mission, Inspiration4, is scheduled to launch from the LC-39A platform at the Space Center. Kennedy (KSC) in Florida. The startup window will last five hours until 07:02 CEST (05:02 UTC).

Plans for carrying out the Inspiration4 mission were announced in February 2021. Its organizer, founder and commander is Jared Isaacman, founder and CEO of Shift4 Payments. He is also a pilot, has the authority to fly civil and military aircraft. He set a record for orbiting the Earth in a light jet, and participated in numerous air shows, raising funds for charity.

The name of the mission refers to a crew of four, which is to inspire the support of the Saint Jude Children’s Research Hospital. St. Jude Children’s Research Hospita(l) in Tennessee, which provides free treatment for serious diseases in children. Isaacman personally donated $ 100 million to the hospital, hoping to raise a similar amount through a mission-related charity. So far, over $ 28 million has been raised. Crew members are expected to represent the four pillars of the mission – leadership, hope, generosity and prosperity.

One of the places Isaacman decided to allocate for a person working on the “front line” of health care at St. Jude, meant to represent the pillar of hope. Hayley Arceneaux, a 29-year-old assistant physician, was selected as the site. She will become the youngest person from the United States to enter orbit. At the age of 10, Arceneaux was battling bone cancer and was a patient at St. Judy, where she underwent knee replacement surgery and had a titanium rod inserted into her femur. He will be the first person to fly into space with a prosthesis. During the mission, she will act as a medical officer.

The next prize was to be awarded to the winner of the competition to use the new e-commerce platform Shift4Shop, owned by Isaacman. The winner was Sian Proctor, a specialist in the field of Earth Sciences, who deals with scientific communication. She was one of 47 finalists in the 2009 NASA astronaut selection process, but was not selected. Currently, she is also an analog astronaut, taking part in ground simulations of conditions occurring during long space missions. Proctor will act as a pilot, representing the pillar of prosperity.

Hello everyone, thank you for supporting my #SpaceArt & #Poetry journey. I hope you’ll check out my @Shift4Shop: https://t.co/pUOcwAwmE1 & help share my #inspiration4contest message & #poem. Let’s unleash our #Space2inspire & create a J.E.D.I. future for all of humanity. ❤️????????????‍???????? pic.twitter.com/JzRf6ayGcL

The last crew member, representing the pillar of generosity, was randomly selected from among those who made a donation to St. Judy. It will be Chris Sembroski, to whom a friend who was drawn in the lottery gave his place. From an early age, Sembroski was interested in astronomy and space flights. He has participated in simulated space shuttle missions and has been involved in promoting regulatory changes to open up access to space. He served in the US Air Force, including maintaining a fleet of intercontinental missiles, and was also sent to Iraq. He currently works at Lockheed Martin. 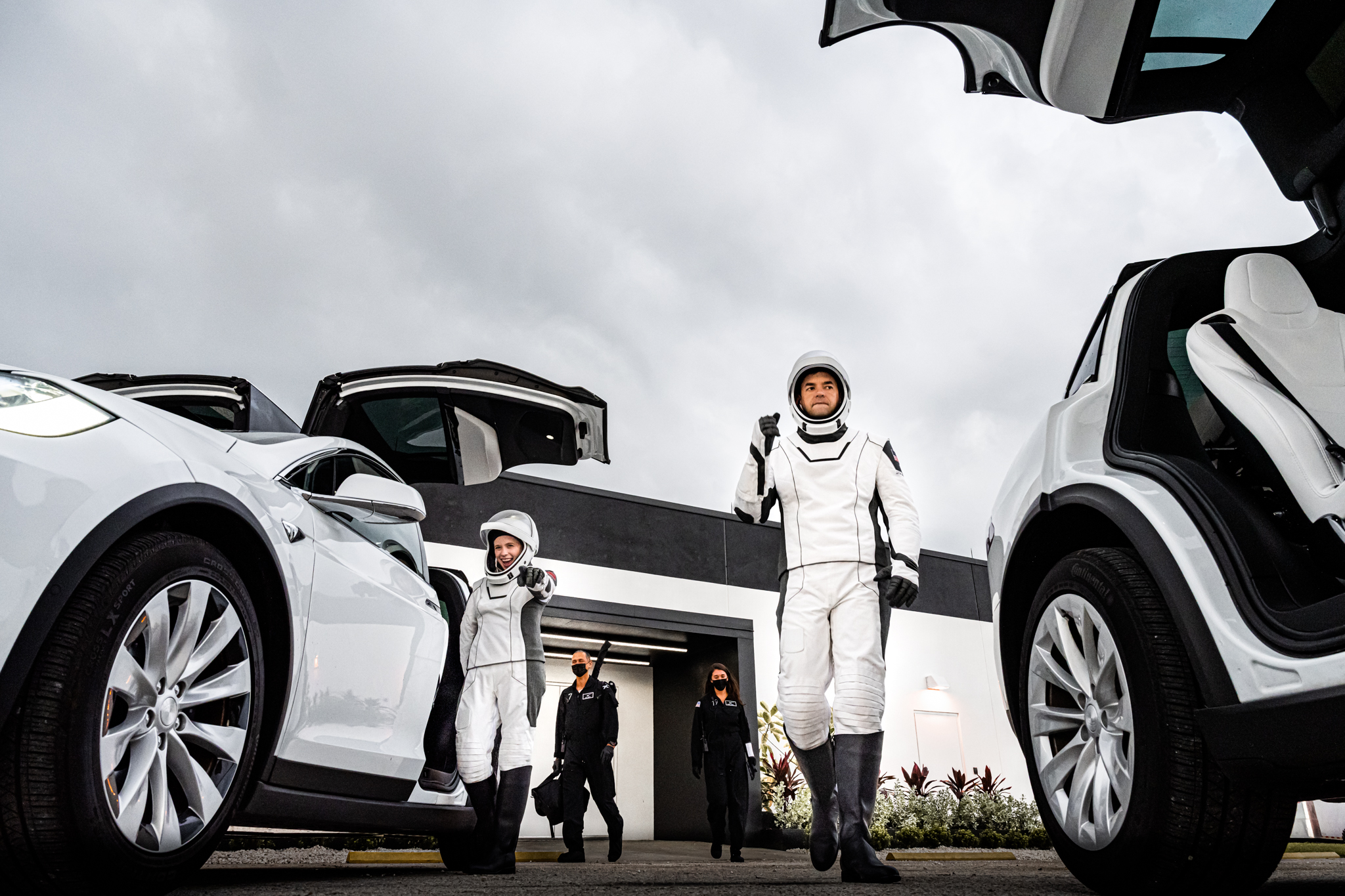 On the day of take-off, the astronauts will put on their suits in a building owned by SpaceX and then be transported to the launch pad. In practice, the procedure will be the same as for NASA launches. The crew will take their place in the Dragon capsule, after which the hatch will be closed. Refueling will start 35 minutes before take-off.

The manned Dragon 2 capsule with four astronauts on board will be placed in an orbit 575 km above the Earth and an inclination of 51.6 °. This is the same inclination as for the International Space Station (ISS) take-offs, thanks to which it will be possible to use the same Dragon capsule emergency landing zones as on the ISS flights. SpaceX is expected to pay NASA about $ 1 million to support the mission, making it possible to use some of the resources used during manned missions for the agency. The separation of the capsule from the rocket is planned a little more than 12 minutes after launch. The mission is expected to last approximately three days, after which Dragon will re-enter the atmosphere and complete its flight in the Atlantic Ocean near Florida.

The broadcast on the SpaceX channel will begin four hours before take-off and will continue until the capsule is placed in the target orbit. It will be resumed before returning to Earth. No continuous broadcast is planned during the flight, but there will be some live connections with the crew. 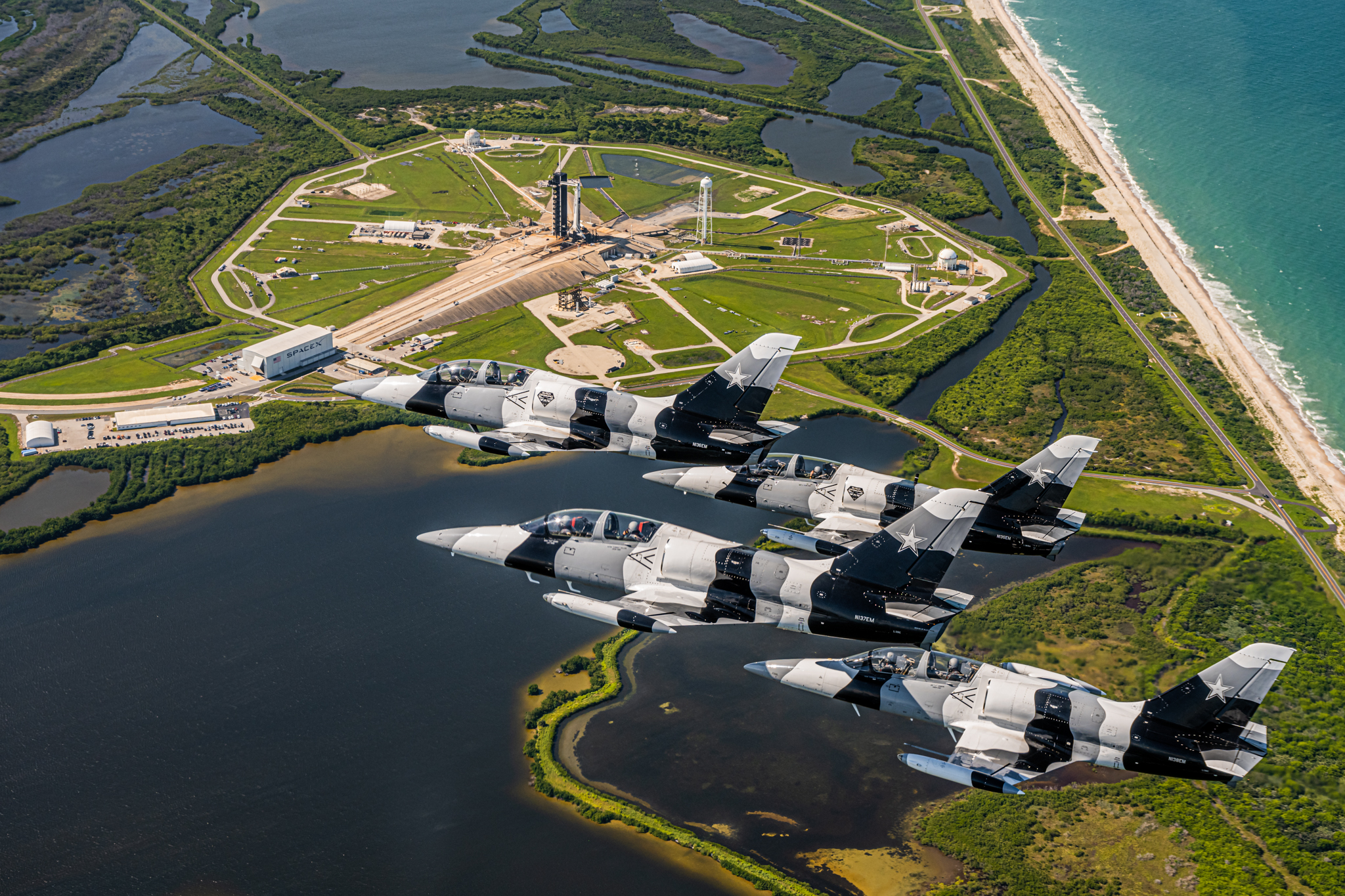 For several months, the crew took part in various types of training and preparation for the flight. The future private astronauts underwent centrifuge training, they also went on a joint mountain expedition to spend time together in uncomfortable conditions and prepare for three days in orbit. From May, training was carried out at the SpaceX headquarters in Hawthorne, California, where the crew participated in mission simulations, including full simulations with flight controllers. In July, there were trainings to stay in the weightless state in a specially prepared plane, trainings related to safety systems on the LC-39A platform, as well as training on lowering the capsule after launching. The astronauts also made several dozen flights in jets. Jared Isaacman stated that he considered these training flights to be more dangerous than the space flight itself.

Final preparations for the launch began at the end of August. On August 30, the CEIT test ( Crew Equipment Interface Test), during which the Dragon 2 Resilience interface and the crew’s equipment were tested. On September 2, a flight readiness assessment was carried out, confirming the readiness of the rocket, capsule, ground systems and recovery equipment.

On September 12, the rocket was launched onto the launch pad, followed by a general rehearsal, during which the crew went through full launch-day procedures, which ended in taking their places in the Dragon capsule. Then a static test of the Falcon 9 took place on the launch pad, during which a countdown was carried out and the nine Merlin engines in the first stage of the rocket were started for a few seconds. 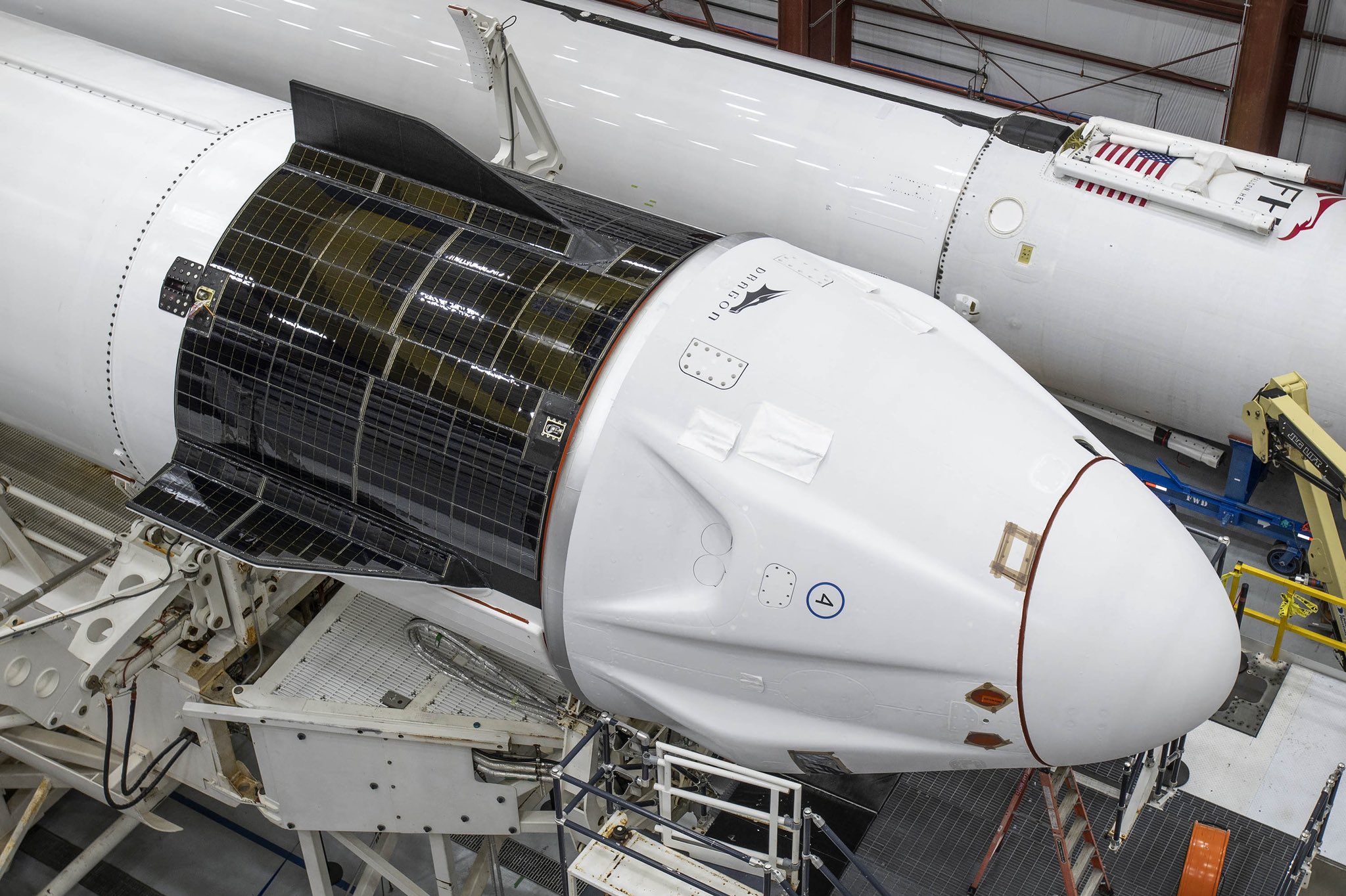 Astronauts will take many interesting cargoes into orbit with them. For the first time in orbit, a track will be played with an assigned unique non-exchangeable token (NFT – non-fungible token). It will be a previously unreleased performance of the song “Time in Disguise” by Kings of Leon. The digital copy of the work with the token is then to be sold at an auction supporting the St. Judy. There will also be various items on board, which will also be auctioned later. These include items with the mission logo and graphics designed by crew members, a commemorative set for the 50th anniversary of the Apollo 11 mission along with a piece of material that participated in the mission to the Moon, or a copy of the TIME magazine with the crew of the Inspiration4 mission on the cover. Hops will also be sent into space, which will later be used in the production of “extraterrestrial” beer.

Astronauts will also conduct scientific experiments, largely related to the health and functioning of the human body in space. You can read more about them in one of the previous articles.

This flight will use the first stage of the Falcon 9 rocket, which previously participated in two missions: GPS III SV04 in November 2020 and GPS III SV05 in June 2021. After the separation of the second stage, the booster’s landing on an autonomous platform was planned Just Read the Instructions (JRTI) in the Atlantic Ocean. This mission will make use of SpaceX’s new support vessel Doug for the first time, accompanying the landing platform on the ocean. 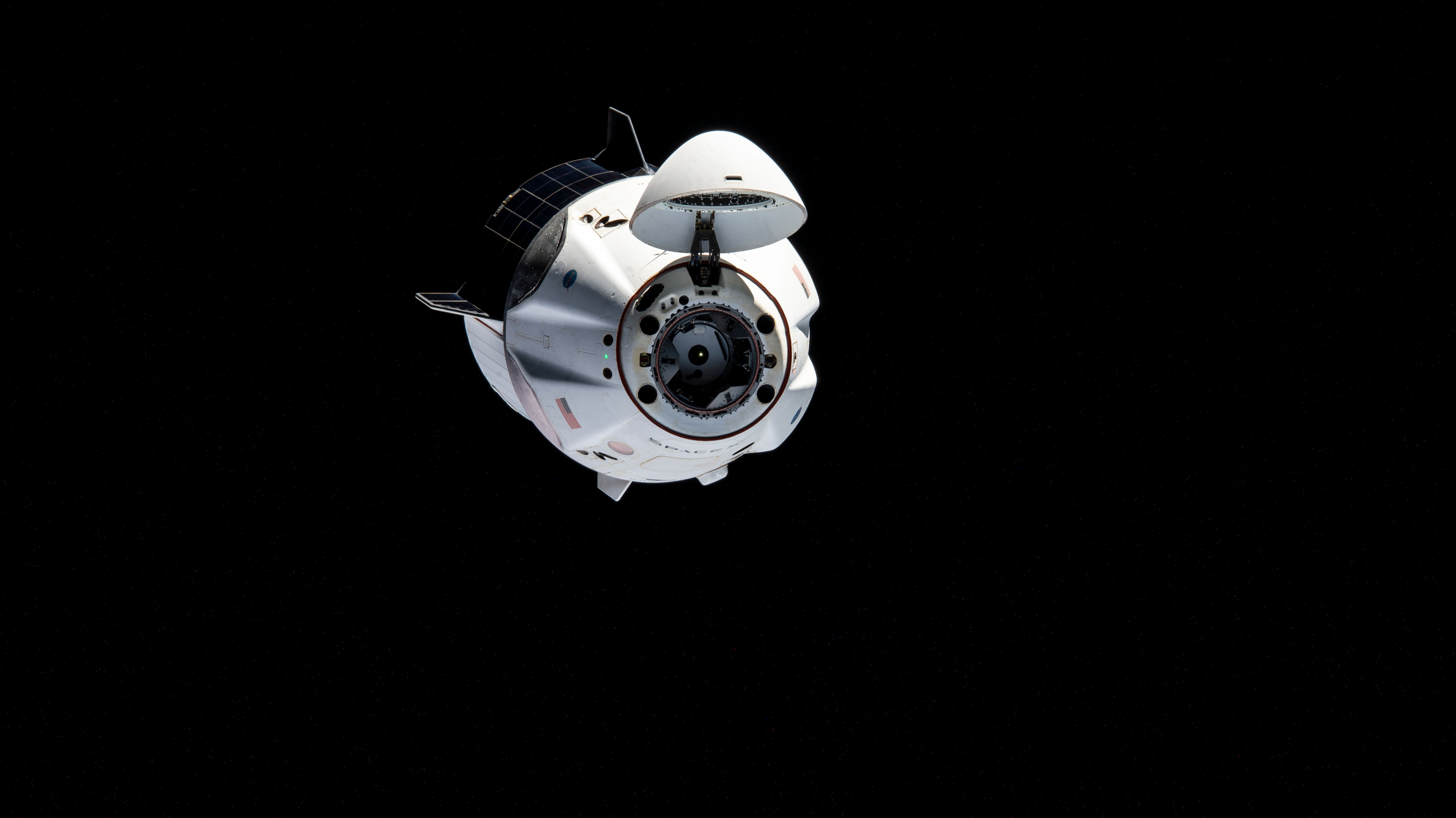 The mission will use the Dragon 2 Resilience manned capsule, which previously participated in the first operational mission of NASA’s commercial manned flight program, Crew-1, in which Dragon was on the ISS from November 2020 to May 2021. As no docking is planned during the mission, the docking port at the front of the vehicle has been removed and an additional spherical window constructed of three layers of acrylic glass has been installed there to facilitate the view of the Earth from orbit.

The weather forecast now gives a 90% chance of starting in the designated start window. Precipitation and storm-related cloud anvils may be the main obstacles. There is also a low to moderate risk of unfavorable weather at the first degree landing site or in the Dragon’s potential landing zones in the event of a breakdown during take-off. If the start is postponed to the next day, the chances of favorable conditions drop to 60%.